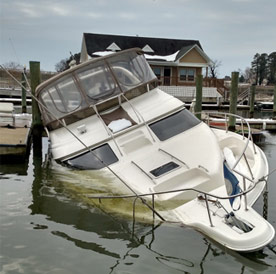 Coldest Winter On Record For Smithfield

A new record is set.

So yeah, it was a cold winter here.  Coldest on record actually.  There are a couple of lessons that need to be learned from this.  For starters, Smithfield Station has seen its fair share of hurricanes over the year.  Nor’ Easters as well.  In fact, this is a place that insurance companies encourage boats to come during these events as we are considered a hurricane hole.

Never in 30 years have we lost a boat.  We walk the docks here during these events and make sure everything is taken care of as if the boats were our own.  Well, that changed this winter.  For the first time ever we had not one, but two boats sink.  The culprit – cold weather.  On this part of the bay we don’t get ice and temperatures in the single digits.

If we do its only for a couple hours so our boaters have never had to take the precautions that those on the northern bay do.  This year we had a record two inches of ice and too much time in the single digits.  In both sinkings a through hull valve was left open on the boats and the fittings were filled with water which froze splitting the pipe.  When the great thaw came, these pipes flooded the boat and they sank within 30 minutes.  Both boats are believed to be a total loss.  We lost a 30 ft Regal and a 45 ft Sea Ray.

There is a lesson to be learned here.  One that we have never preached before in Smithfield.  When the weather gets cold, close the through hull valves.  If this had happened in both situations we would be able to maintain our perfect record.  Mind you, both owners were meticulous about their boats and had recently checked on them so it was not a matter of neglect.  Be safe, next year and remember to close your valves.

For now though, its spring!  Lets remember the lessons of the winter over a margarita on the back of our boats!  Tight lines and fair winds, Randy